On October 29th, 2016 I made a pilgrimage of sorts from Kyoto to Sohonzan Zentsu-ji on Shikoku. Through serendipity I had discovered that this Temple was where Kukai (posthumously named Kobo Daishi), the founder of Esoteric Shingon Buddhism in Japan, was born and grew up. The five elements of earth, fire, water, wind and space are an essential part of the teachings and practices of Shingon Buddhism. As Zentsu-ji has been identified as one of the top three temples associated with Kobo Daishi (the others being the Koyasan complex and Toji Temple, both on Honshu, both of which I have visited) I decided that catching three trains each way was worth the effort.  It was an effort very well rewarded.

My trek from the Zentsu-ji train station found me approaching the main thoroughfare to the Temple from a side street. You can imagine my surprise and delight when I turned the corner and saw a five element stupa (gorinto) perched above a canopy in the main street. Previously I had principally seen them as grave-markers in cemeteries. For example numerous gorinto can be found in Koyasan where Kobo Daishi has been laid to rest.

My journey to Zentsu-ji, and an important discovery I made there, was only made possible through the timely translation of two posters by Lesley Kehoe in Melbourne. Lesley owns and runs an internationally recognised Japanese fine art gallery that represents a dazzling array of artists. I came to know her through the insightful commentaries and essays she writes for her exhibitions and through the seemingly innate connection to the forces of nature that her artists capture in their creations. My sincere thanks goes to Lesley for her interest in, and assistance with, my exploration of the elements in Japan.

I spent several hours at the Temple and the small mountain to its west. Even then there were many aspects of the Temple grounds and surrounds that I ran out of time to see. It is a place that I will definitely return to. The next time I will combine it with a trip to Konpira Shrine (aka Kotohira-gu) which is one train stop away. The shrine is famous  for the nearly 1,400 steps that leads to the inner shrine and the spectacular views. I’m keen to learn more about its role in safe seafaring and the intertwined history between Shugendo, Shingon and Shinto at the site.

Getting back to Zentsuji, a series of images follow from the Temple and the closest mountain. The five elements are expressed in many ways – by gorinto, the five-story pagoda, the five colours and of course the pilgrim’s staffs. I was fascinated to see how many ways the elements were represented. 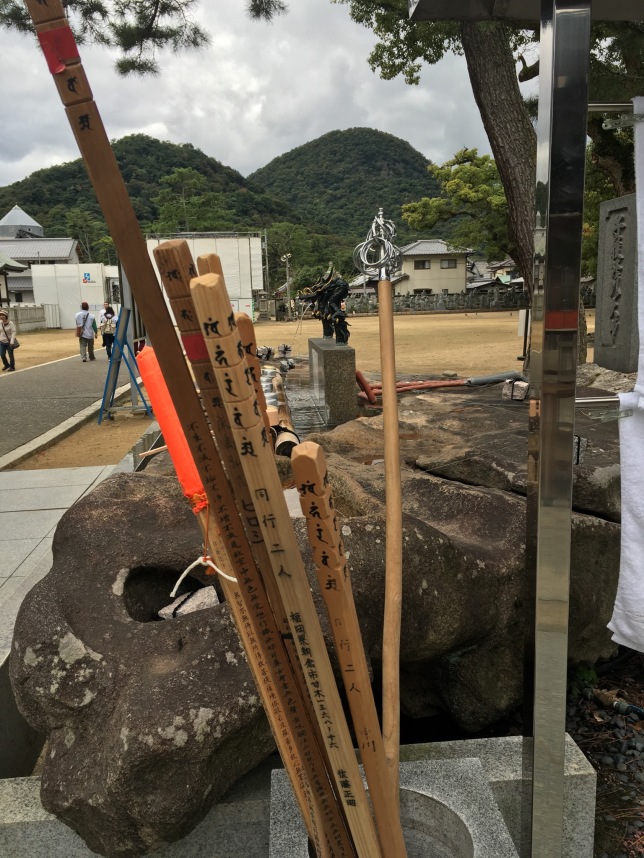 Pilgrim’s staffs with the five elements (earth, water, fire, wind and void) written in Sanscrit around the top of the staff. The dragon water spouts in the background are also strongly related to the elements. I have written more about the pilgrim’s staff in my post ‘Returning to the elements‘.

The five storied pagoda has been  destroyed by fire twice. The current version was completed in 1902. The five stories represent the five elements, as do the five colours in the banners. These are explained later in the post.

Statue of Kobo Daishi, with accompanying gorinto, at Kanchi-in. This sub-Temple is located in-between the eastern and western sections of Zentsu-ji. Kobo Daishi is reported to have built the Sub-temple (not pictured here) in 807. A mini-pigrimage can be found at Kanch-in where soil from the 88 Temples on the Shikoku Pilgrimage have been transplanted beneath 88 statues. 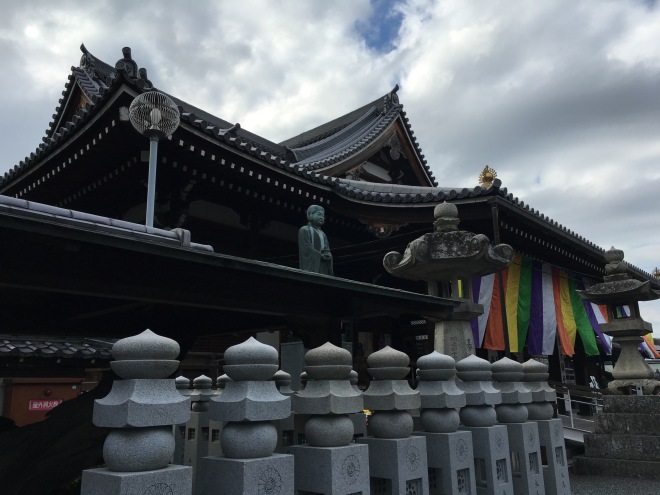 The gorinto in the foreground of this image were like a fence around the remnants of a sacred tree. The statue in front of the main Temple shows Kobo Daishi as a young man, holding a gorinto in his hands. The five coloured banner also represents the elements, amongst other things.

The building with the large gorinto looks like it was constructed relatively recently. From what I can work out, the structure contains images of Kobo Daishi. Text on an image of the building refers to ‘two accompanying eternity’. I hesitate to say this, as I have much to learn about Shingon Buddhism, the phrase however may be related to the idea to Kobo Daishi accompanies each person on their pilgrimage around Shikoku. And beyond it seems.

When I ventured into the carpark on the western side of Zentsu-ji Temple I found this large map of two walks for pilgrims up and around the nearby mountain. I did both.

Every 50 metres or so on the trail to the top of the mountain there were signs saying either ‘Beware of fire’ (this one) or Wildfire prevention. The distance to the top of the summit was also recorded. Fire prevention is a major concern in Japan, as touched on in my post ‘Beware of fire’. I was a little surprised though at the frequency of the signs.

Three stone statues were found at the top of the mountain, although they didn’t look like the images on the big map (I was expecting wooden structures, akin to shrines). To the left is Fudo Myoo, to the right a sacred rock, and in the middle a multi-armed deity I am still confirming the identity of (Kongoyasha Myoo perhaps?). The pink cosmos were flowering everywhere I travelled in October, creating beautiful patches of delicate colour. They certainly brightened up what was a grey day on Shikoku.

The walk around the base of the mountain had groups of statues at close intervals and three maps of different sections of the Shikoku pilgrimage. The deity represented here is Fudo Myoo, sometimes called a fire god. With so many different numbered statues I thought that I was walking the Shikoku mini-pilgrimage route. Especially with the maps. As mentioned earlier, it turns out that the mini-pilgrimage was in the Temple grounds. If anyone can tell me what this larger circuit represents I’d appreciate it. I can provide a closer image of the map with the Japanese explanation if that helps!

My last stop was at the Temple shop where there was a wide selection of items to purchase. I was instinctively drawn to a small multi-coloured badge that appeared to be related to the five elements. Having bought a badge, and taken a photo of the poster that described it, I made my way back to Kyoto. By the next day Lesley had translated the image for me. What a gift.

This is the poster that was posted above some small coloured metal amulets/charms at Zentsu-ji Templee. From the colours, imagery and kanji I had a strong feeling that the charm was related to the five elements. Google Translate wasn’t able to assist, so I turned to Lesley Kehoe who is an expert in speaking and reading Japanese. Her translation, reproduced below in italics, was a watershed moment. To see the five elements referred to explicitly in this way, and to be associated with five colours and five shapes, was wonderful.

Reading right to left: each line top to bottom

[Shiki] is the internal power that each one of us has.

With the joining of this charm and ‘shiki’, many things can be realized/ fulfilled.

Top left hand side: The Power of the Five Elements.

To complete the story, the final image is where my journey to Zentsu-ji Temple on Shikoku started – the appealing poster that I found and photographed at Daihoon-ji Temple in Kyoto. It was the gorinto images that attracted me initially. With Lesley’s  assistance the poster expanded my understanding and appreciation of the elements in Japan.

The poster that started it all, at Daihoon-ji in Kyoto. Lesley Kehoe translated the poster for me, in doing so having to grapple with specific terms in Buddhism that are not in general use.  The complex translation includes references to meeting Buddha, meditation, baptism and pilgrimages – including on Shikoku. It also included the word ‘Sohonzan’, which means General Head Temple. When I combined Sohonzan and Shikoku in a Google search, Zentsu-ji Temple came up.  The rest is history. (On reflection the temple I visited in Shikoku is not explicitly mentioned on the poster. Lots of stuff was happening when I read Lesley’s translation! From what I can gather now it is advertising the Kyoto Jusan Butsu 13 Temple pilgrimage, with each of the temples having a different main deity. This makes the fact that I ended up in the place that I was meant to be even more remarkable).

In August 2017 I was very excited to find this diagram of a gorinto in the book “The Symbolism of the Stupa‘ written by Adrian Snodgrass (1985).  The original image was created by the Shingon monk Kakuban. Snodgrass is an expert on Shingon Buddhism. A six element mudra is shown here in the mid triangle-shaped section of the gorinto.  Also known as the ‘Fist of Wisdom’ the mudra equates to the Diamond World Mandala. This diagram shows the elements both in the fingers (mudra) and in the gorinto itself – which represents the body in this example. The links to the cakras (also known as chakras) in the body is of particular interest to me. Elsewhere in his classic book Snodgrass writes that the sixth element, consciousness, is present by implication in the stupa form.

There is another five element framework that has much power and has played an influential role in Japanese culture – the five Chinese phases/elements of water, wood, fire, earth and metal. You can read more about it in my blogs on ‘wood generates fire‘, Traditional Japanese Medicine and gogyo. As the comments on this post capture, the Obaku Zen sect use the colours of the five Chinese elements for the prayers bags that visitors offer to Buddha. Their head temple  Manpuku-ji is in Obaku, which is near Kyoto. My 2016 visit there led me in a totally unexpected direction in my exploration of the elements. I have written about this and more in my post on Zen and the five elements. Unlike Shingon Buddhism, to an external observer the elements are more subtly embedded in Zen teachings, practice and imagery.

9 thoughts on “The power of the five elements”