It’s the fourth week of June 2016 and it is the rainy season in Japan. The season is known as Tsuyu, meaning “plum rain”, because it coincides with the season of plums ripening. It is hot, sticky and very wet at times. It also means long days, vibrant vegetation, misty mountains, rice fields in flood, hydrangeas, the refreshing of water supplies and more. As you might expect, my thoughts over this period have turned to the element of water. I am using illustrations to help tell this part of the story of elemental Japan. 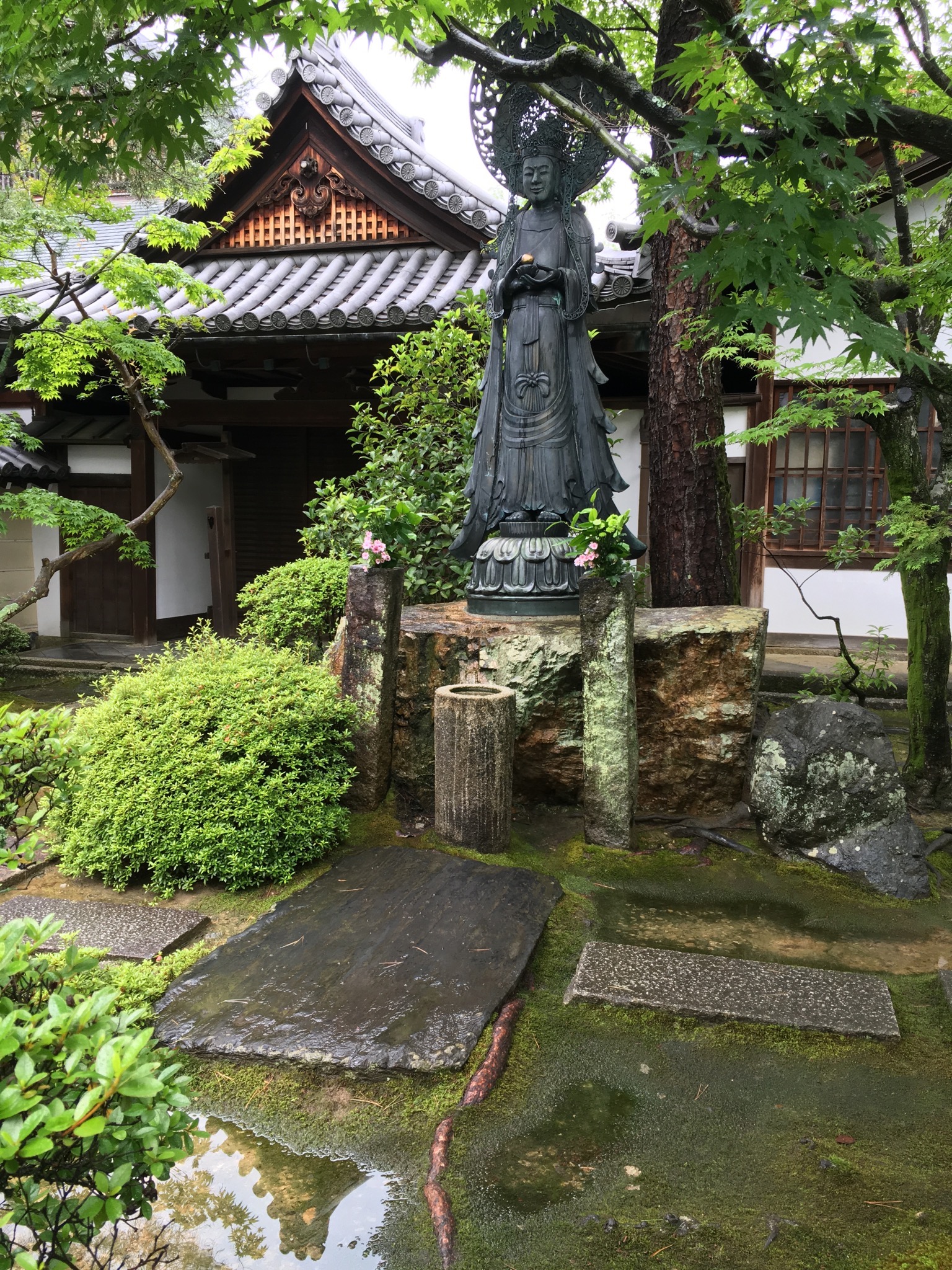 This image at Reiun-in Temple at the Myoshinji Zen Complex in Kyoto  was taken an hour after it rained on June 23rd. There is a greenness, lusciousness and vibrancy to the vegetation at this time of year that speaks of new life. The water droplets on the leaves and reflections also add to the beauty of the rainy season. 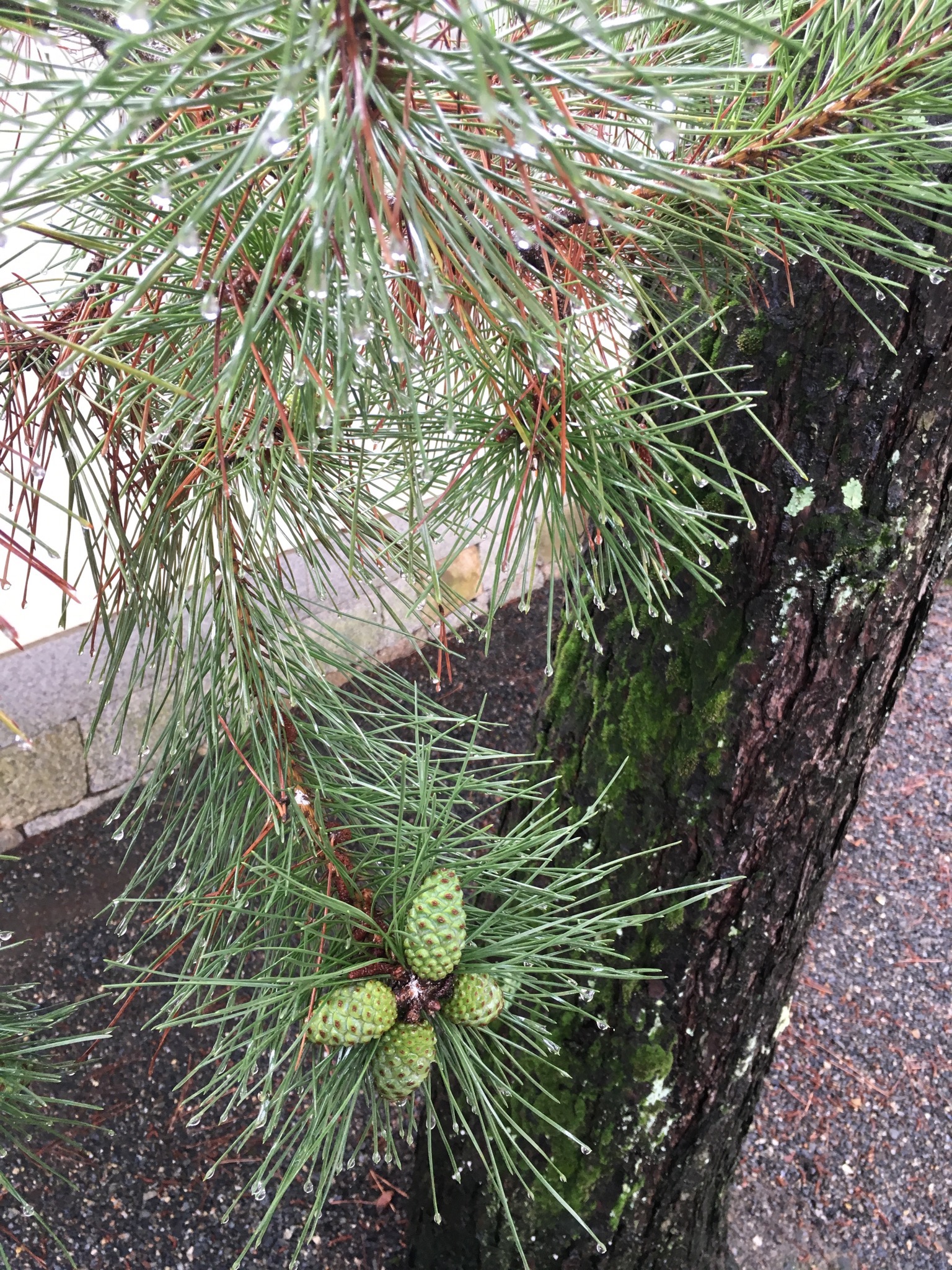 Jewel-like water droplets on the end of pine needles at Myoshin-ji Temple. This image was also taken on the morning of June 23rd, an hour after it rained. Once the sun came out these jewels soon disappear.

Like the kanji for fire (see my post on ‘Being careful of fire‘), the kanji for ice (frozen water) is commonly found in Japan where a shaved ice sweet is sold. Here the kanji can be seen in red, blowing in the wind alongside some carp and a wind chime. Wind chimes, which catch the slightest breeze, are a feature of the humid summer in Japan.

Here is what I thought was the kanji for water, seen at Koshiya – a famous sweet shop near Nijo Castle. The sign is advertising the sale of drink bottles for 150 Yen in the water-filled stone basin below. It is important to keep hydrated during the rainy season, so there is water both inside and outside! The kanji for water differs from that of ice in that it has two strokes on the left rather than three. The angle of the strokes can vary when they are hand-drawn. That’s why I thought this sign read mizu (water), although I did wonder about the small stroke in the top right. Now I realise that as it is blowing in the wind, the sign is probably back to front in this image! So this is also the kanji for ice. A lesson for new players.

The stylised kanji for water (bottom centre) can be seen in this access plate, presumably to the water pipes below. Usually the top stroke on the right has more of an angle, I have been told that this is kanji if for water through. Once you know they are there, you see these access points fairly often while walking around the streets. Mostly they are grey rather than blue. There are also access plates that have kanji for both fire and water on them (see next image). The water that supplies the towns and cities of Japan will get a boost during the rainy season. My recently developed theory is that the challenges of telling apart water-related kanji is related to the fluid nature of the phases of water itself!

Here the kanji for fire (middle top) and water (middle bottom) are found together on a man-hole cover in Uji. With the fire engine illustrated, it is the best example I found of the two kanji together. It is a good reminder of the interconnectedness of these elements.

Thanks to the Sunroute Hotel in Osaka, where I stayed in October 2016, the difference between the kanji for water and ice are clearly illustrated here. Finally, a contemporary example of how close the two kanji are.  🙂

It’s raining very heavily in this image although it is hard to show. One indication is that there should be mountains on the horizon, another is the person on the bike with the umbrella! So far there haven’t been many rainy season events like this. We will see what the next month brings.

With rain comes umbrellas of many sizes, colours and patterns. They add variety to the streets and also make negotiating the walk-ways more challenging, especially with the bikes still weaving in-between the pedestrians. When the bike-riders have umbrellas as well, such as in the image above this one, the space becomes even more limited. 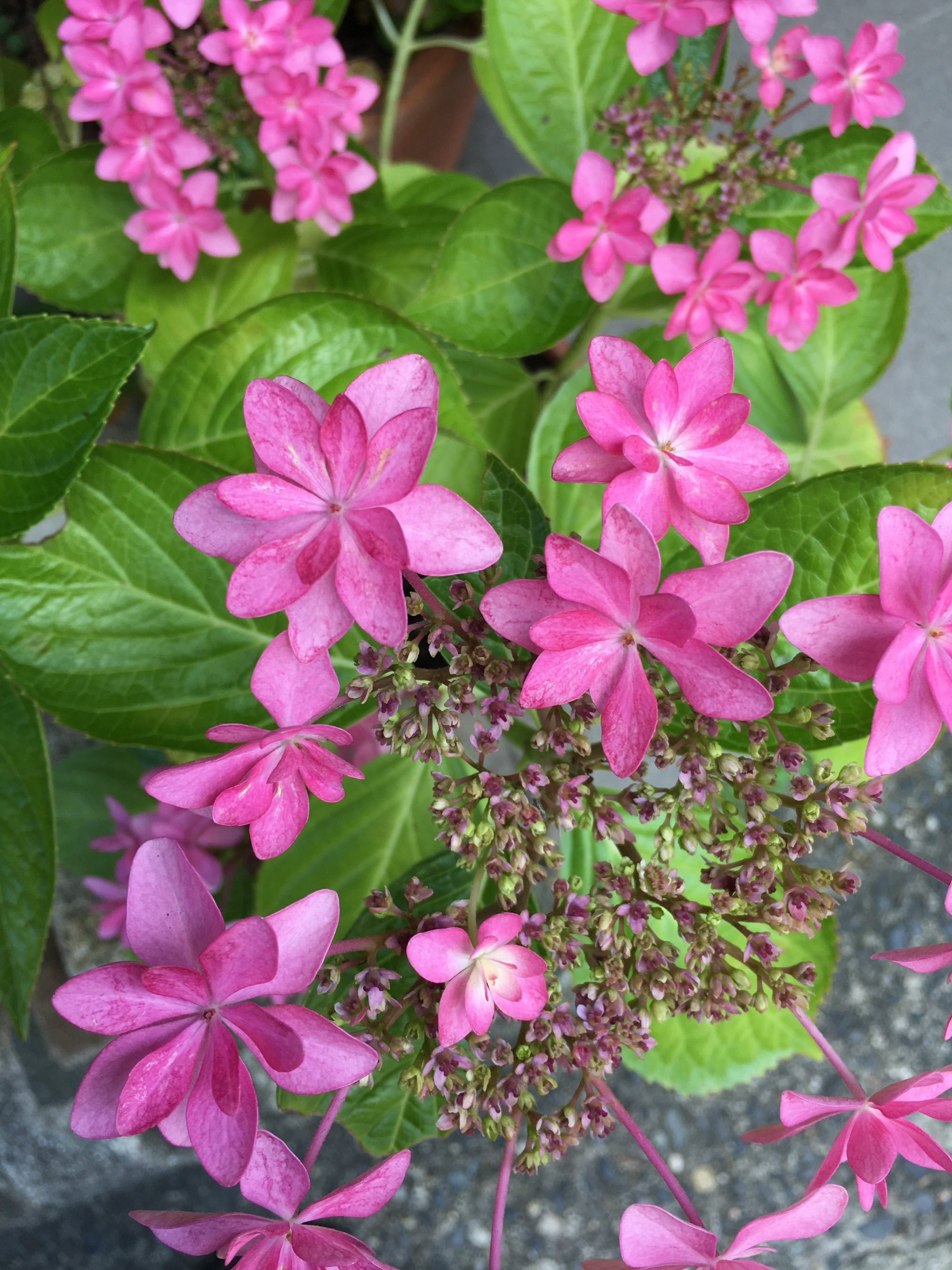 Also adding colour and variety to the streets are the amazing number and variety of hydrangeas, a summer flower. Many of them I have never seen before, like this stunning magenta version. Japan is rightly famous for its cherry blossoms and autumn leaves – while the summer hydrangeas add colour at a different scale, they are also deserved of fame outside of Japan. 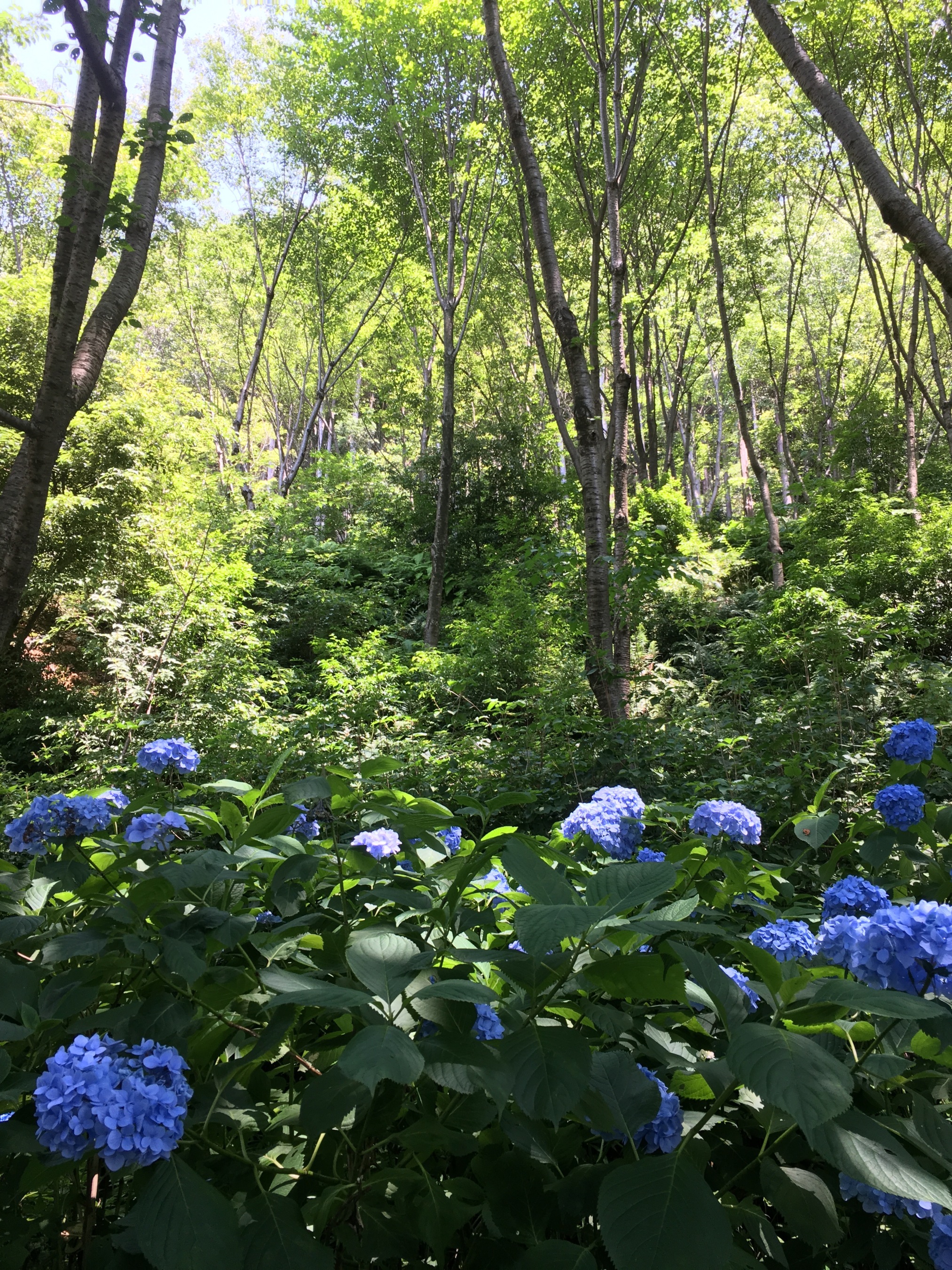 Another image of the vibrant hydrangeas currently in flower. This photo is from the mega-famous Kiyomizu-dera Temple in Kyoto, appropriately called the “Pure Water Temple”.

This image of the pure water at Kiyomizu-dera Temple shows what mega-fame can do as far as visitor numbers are concerned. I have read that 10 million people visit the Temple each year. This as turned the tasting of the water, which is believed to have wish-granting powers, to become a highly regulated and rapid  exercise. There is no time for contemplation, at least when there are many school groups present. Perhaps a better time to visit is during a rain shower when visitors may be fewer in number. That would be a truly watery experience. 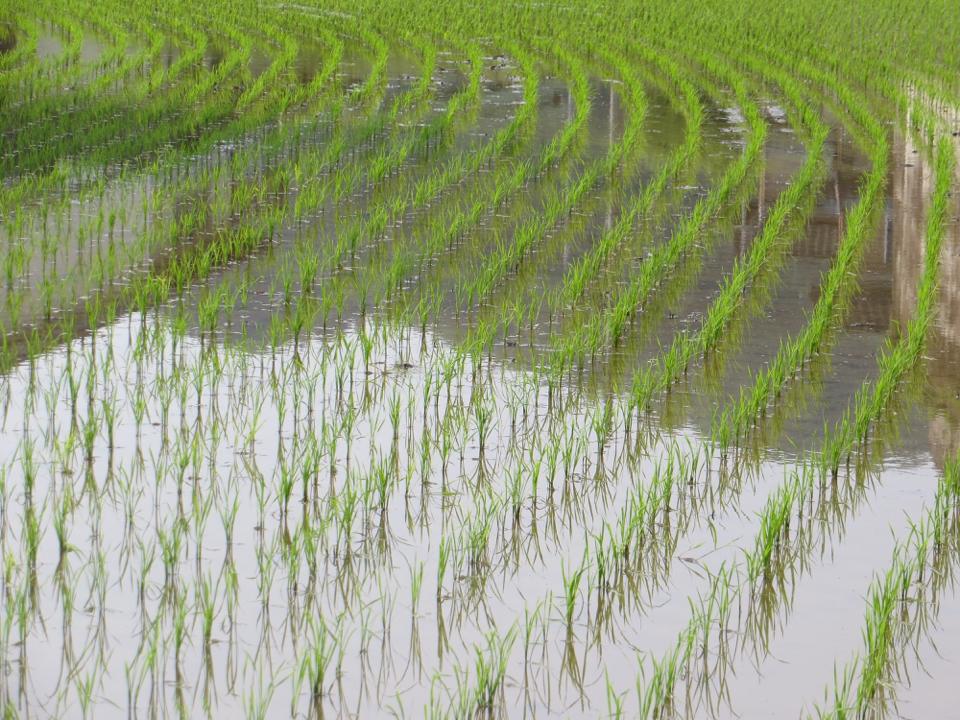 ‘Water, water everywhere’ is an expression that aptly applies to Japan at the moment. At this time of year the rice fields are full of water and newly planted seedlings. The amount of water across the lowlands is impressive. Terraced rice fields are also found in some parts of Japan. I’ve been told that these large expanses of water change the air temperature compared to other times of year. It also provides habitat for a number of birds and amphibians. 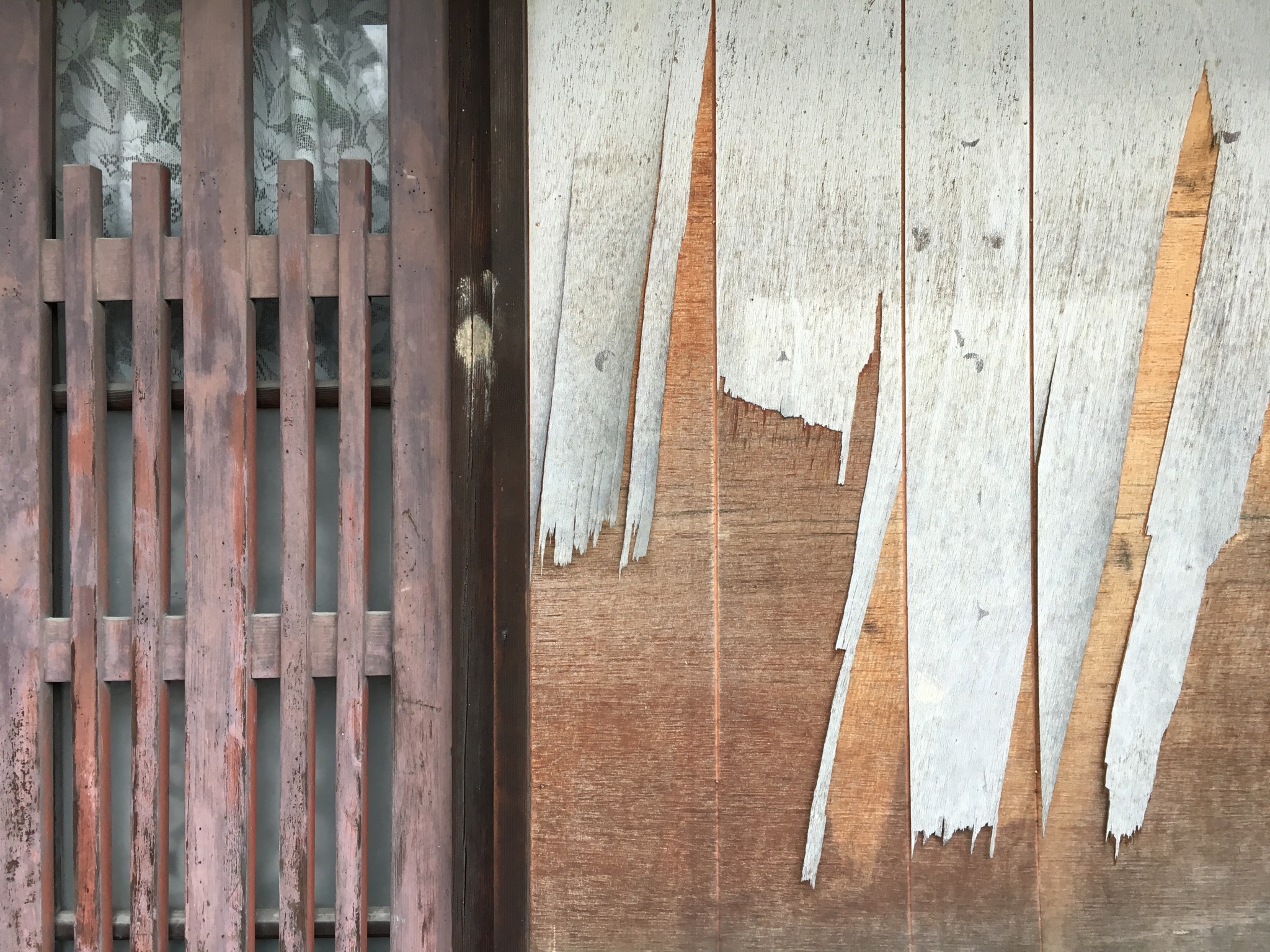 Long periods of heat and rain does lead to issues such as mould and weathering of wood, a building material that has a long history in Japan. When I posted this image from the streets of Kyoto on Facebook, my friend Richard who lived in Nagasaki for two years made this comment: “This photo reminds me of why people need to visit Japan during tsuyu to fully appreciate Japan’s annual climate patterns, its daily weather and how the two impact on day to day personal life (the photo specifically reminds me of the constant battle I had with home maintenance when I lived there) and community life (the photo also specifically reminds me that following the hottest, wettest, stinkiest time of year is Obon, a (series of) festival(s) making summer bearable and easier to overlook all the maintenance jobs needing to be done!!!)” It was an insight that proved much food for thought.

One indication that I have not experienced the full extent of the rainy season yet is that I haven’t seen any ‘teru teru bozo’ hanging in windows or outside. They are said to be common in Japan when people want the rain to go away. Something to look forward to!  I am starting to see more colourful wind spinners though, another sign that summer is here, and here to stay for a while. (Image source: japanesemythologywordpress.com)

This summer survival guide, posted on Facebook yesterday by Gaijinpot, also suggests that tsuyu and the warmer, drier although still humid summer period that follows can wear you down. Will viewing the rainy season from an elemental perspective make it more bearable? We will see!

I like this approach to summer, seen at a newsagent near Ikoma Station. It has a sign saying ‘Happy Summer’ with postcards with summer-related images for sale. The shop also had several wind chimes in the entrance. The attitude people bring to tsuyu and the following humid heat will influence their experiences.

Most of the commentary so far has related to the physical impacts of the water element. Before the rainy season started I was very fortunate to see the exhibition ‘Prayers to Water‘ at Ryukoku University in Kyoto. The image above is the front cover of the catalogue. This marvellous exhibition explored the importance of water to the Japanese people from a spiritual perspective. It focused on Buddhist and Shinto deities related to water, with a particular focus on the Dragon Diety (Ryujin), related to prayers for rain. Like in my home country of Australia, sometimes there can be too much water in Japan and at other times not enough.

While I have been in Japan this example of too much water occurred in Tasmania, where I live in Australia. Many people were affected. Unlike Japan, it is cool in Tasmania at the moment and the days are short. Features that make recovering from this rare event a particularly challenging task. Here it was definitely the case of ‘rain, rain go away’. Water, like fire, is an element that can be both friend and foe. (This image of Latrobe on the north coast of Tasmania is courtesy of ABC news).

Another connection to water that I am pondering as I travel around is the Japanese art of Sumi-e – ink wash painting with black ink. This fine example is at Shunkoin Temple. The artist captures the spirit of the scene or subject through the careful application of water in different shades of black. It is an art that would take years to master. I wonder if there is a connection between sumi-e and tsuyu? Something else to explore.

6 thoughts on “Tsuyu, the rainy season”