The extraordinary 2018 typhoon season in Japan has been playing on my mind. The frequency, size and trajectories of typhoons this year, and the level of disruption and damage, has drawn the world’s attention as well. It’s not just that I was going to be back in Japan  soon after after the destructive Typhoons Jebi (Typhoon number 21) and Trami (Typhoon number 24) made landfall, with another typhoon on the way. Something is different. Two catalysts have led me to delve more deeply into typhoons as one of the elemental forces that have helped shaped Japan and her people: 1) hearing reports from my friends in Japan about living through these Super Typhoons, and 2) seeing Typhoon Trami from space. From the ‘Kamikaze’ typhoons that were crucial in the defeat of two Mongol invasions of Japan over 700 years ago, to modern interpretations of the Gods of Wind and Thunder at Narita Airport, typhoons play a critical role in the history and culture of Japan. 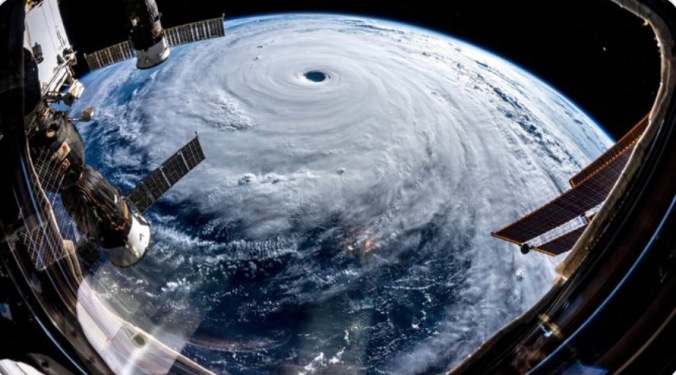 While I’ve seen many aerial images of typhoons before, this picture of Super Typhoon Trami really struck me. Taken from the International Space Station on 26 September 2018 the sheer size, power and energy of the typhoon is breath-taking. The elements of wind and water combine in a spectacular way. Source: BBC Weather. 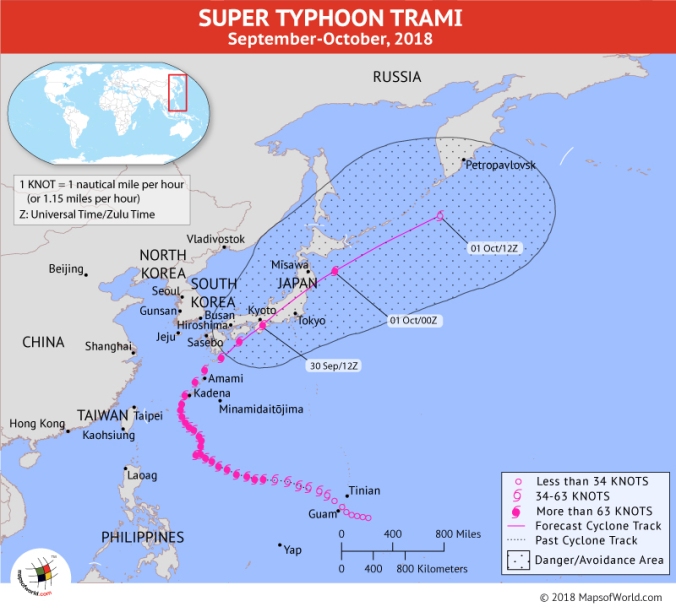 This image from Maps of the World shows the predicted path of Super Typhoon Trami on September 30th, 2018. It puts the image above into perspective. The large area labelled ‘Danger/Avoidance’ illustrates the potential widespread impacts of these major typhoons. As it played out the damage caused by Typhoon Trami overall was less than Super Typhoon Jebi that occurred earlier in September. Two Super Typhoons occurring so close together must put a strain on emergency services though. 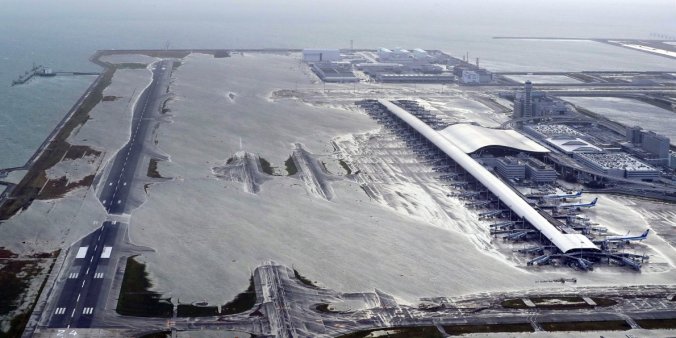 Numerous images and videos hit the internet of the impacts of the 2018 Super Typhoons in Japan. This photo shows Kansai Airport under water after Typhoon Jebi struck in early September, around 3 weeks before Typhoon Trami. The Airport, the major hub in western Japan, was closed for several days. At a local level, friends sustained damage to their homes, had their plans changed, and livelihoods affected. Many trees were also blown over. I can understand people being scared. Source: http://www.televisor.co.uk. 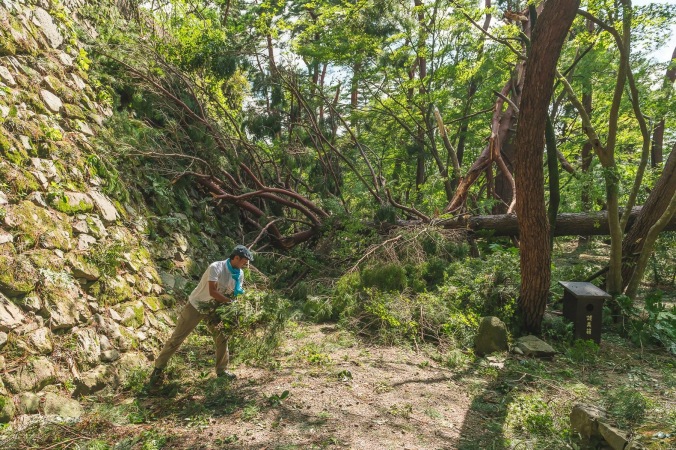 At the local scale many trees were blown over during the typhoons, some over train-lines and roads. In addition to hampering transport, the loss of the trees reduces animal habitat and changes the dynamics and appearance of gardens and landscapes. This photo of the clean-up immediately following Typhoon Jebi was taken at the Headquarters of Oomoto in Kameoka by Bill Roberts. 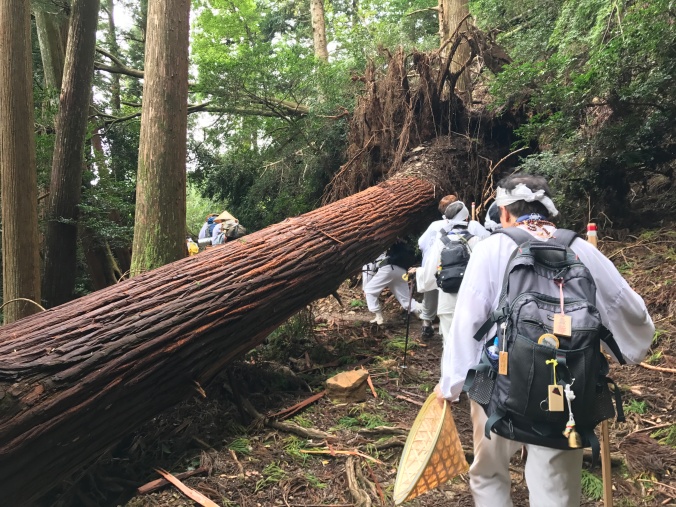 Once I arrived in Japan I was able to see some of the impact of the typhoons first hand. On October 6th Kansai Airport was operating as if nothing had happened. Not so the next day when the the energy of Typhoon 21 (Jebi) was evident by all of the large trees ‘thrown around’ on Mt Atago, overlooking Kyoto. One of the small shrines where Wani-ontakesan prays (the Shugendo group I was on pilgrimage with) was almost completely crushed.

The 1969 book ‘Geography of Japan‘ (written by Isida Ryuziro) states that typhoons are considered the largest disasters in Japan, because vast areas are influenced, their season occurs while rice is growing, and torrential rains usually accompany them. The author refers to the great damage caused to houses, crops, and communication facilities on land and sea. As demonstrated recently, severe disruption to travel also occurs.

The Geography of Japan documents the significant loss of life and property damage associated with typhoons between 1945 and 1961, as shown in the table below. The Ise Wan Super Typhoon (aka Typhoon Vera) that struck Japan in 1959 was exceptionally intense and exceptionally damaging.  The unprecedented destruction led to significant reform of Japan’s disaster management and relief systems, including the introduction of legislation on disaster risk reduction. Improved mitigation, warning systems and recovery efforts following typhoons has seen the loss of life reduced over the last 60 years. Wikipedia has a comprehensive article on the Ise Wan Typhoon for those interested in learning more about its substantial impact on Japan and how the country manages disasters.

The heading of this table in the ‘Geography of Japan‘ (1969 edition) shows the long-lasting impact of WW2 on the country – including the ability to manage natural disasters. The Ise Wan Super Typhoon is reported as causing a major setback to the Japanese economy which was still recovering from the war.  My sister found this informative book in a second-hand shop and passed it on to me – thanks Ruth!

Over 700 hundred years ago two typhoons had a greater impact on Japan than the Ise Wan typhoon did. The typhoons are credited with changing the course of history through their role in debilitating the Mongol Army that tried to invade Japan by sea in 1274 and 1281. Known as divine winds (Kamikaze), the typhoons occurred at a time when there was greater regional activity in summer storms in the Kyushu region. Scientists who study these typhoons say they may serve as a prominent example of how past increases in severe weather associated with changing climate have had significant geopolitical impacts. Recent typhoon activity in Japan has also been linked with climate change, this time human-induced. 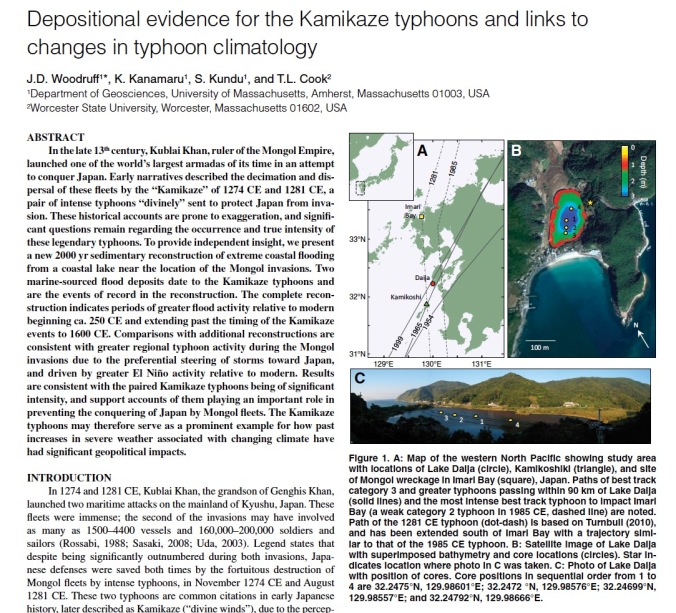 This paper on the Mongol invasions and typhoon climatology, cited above, was an eye-opener. It  was discovered when I was looking for books written about typhoons in Japan. I found 3 books on the Mongol invasions that focus on the battle tactics of both armies. This paper, published in the journal GEOLOGY in 2015,  concentrates instead on the typhoons associated with the battles. I also came across a children’s book on typhoons in Okinawa that I’d like to explore. Okinawa, at the southern tip of Japan, bears the brunt of most typhoons during the summer season.

The Japanese Gods of Wind (Fuijin) and Thunder (Raijin) have both been credited with protecting Japan from the Mongol invasion by creating the divine winds. These weather gods are both feared and respected for their power over nature. The most well known depiction of the Gods is on a gold screen at Kenninji, the oldest Zen temple in Kyoto. To protect the the screen the original is now displayed at the Kyoto National Museum with the Temple showing an excellent reproduction. We have a smaller reproduction, shown below. The gold screen is also recreated in Kyoto Station as a welcome to the millions of visitors who travel to the ancient capital. It is a timely reminder of the power of wind in the Japanese archipelago. 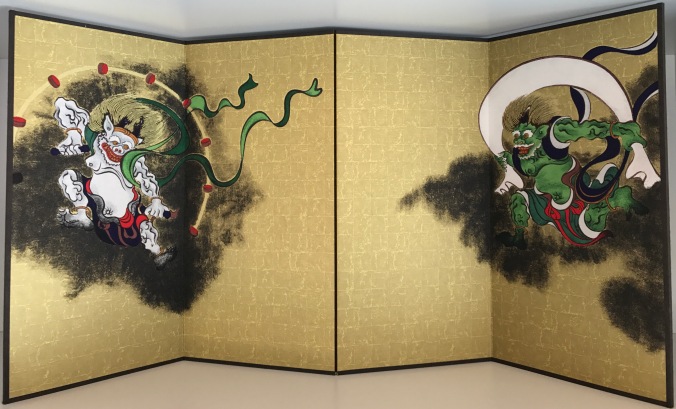 Painted around 1639, the dynamic pairing of the Gods of Thunder (Raijin, on the left) and Wind (Fuijin, on the right) is full of energy and power. The small reproductions of the gold screen, like this one we have at home, are widely available in Japan. 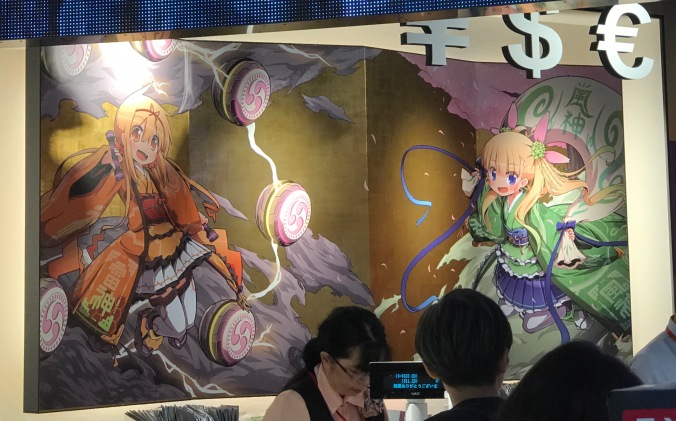 It was with some surprise and enjoyment that I discovered this modern take on the Gods of Wind and Thunder in the Departure area at Narita Airport in August 2018. The blending of old and new, and the representation of traditional imagery in modern form, is common in Japan. It is one way of keeping history and culture alive. 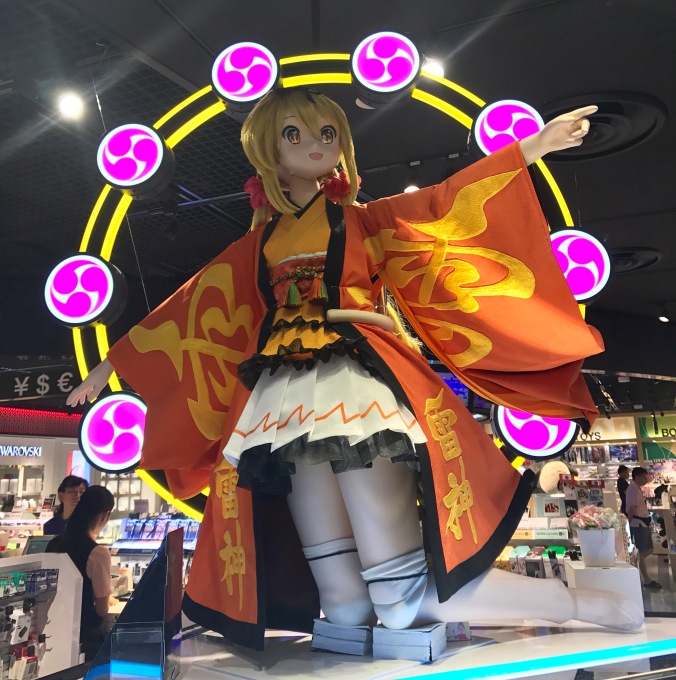 In addition to the image behind the payment counter, Fuijin and Raijin were represented by large models on either side of the main entry way to the departure lounges at Narita Airport. The bold colours used for Raijin’s thunder were particularly striking.

Typhoons are one of the many natural forces that shape Japan, along with earthquakes, tsunamis, volcanoes, floods and fires. The storms occur annually during summer, making them the most regular natural phenomenon with the potential to cause disruption. The number, severity and trajectories of the typhoons differ considerably from year to year, as does their impact. Super Typhoon Jebi (typhoon number 21), the most powerful in Japan for 25 years, closed Kansai Airport for several days in September 2018 – the image at the start of this post shows the level of inundation. It was also closed for Typhoon Trami (typhoon number 24) a few days later. That’s the airport I’m flying into, one which I now view in a different light.

A typhoon was also on my mind on an earlier trip to Japan in late July 2018. Typhoon 12 was due to make landfall as I was due to land at Narita Airport. My plan on arrival was to travel in an easterly direction to northern Honshu, the main island of Japan. Normally the typhoon would have taken the same path. Instead it travelled in a westerly direction. This was the first time this behaviour had been recorded since the Japan Meteorological Agency started compiling information on typhoons in 1951.  An unusual typhoon season indeed. 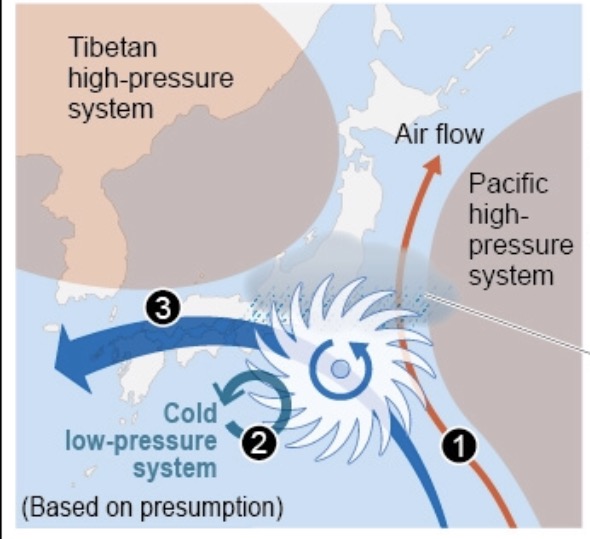 This image has been adapted from an article in the Asahi Shimbun that explained the rare path taken by Typhoon 12, travelling across Japan from east to west (the big blue arrow) instead of west to east. The change from the normal direction was influenced by two high-pressure systems (numbers 1 and 3) and one low-pressure system (number 2) interacting in complex ways at large scales. While this change meant my travel plans were not interrupted, this was not the case for everyone.

Any inconvenience caused to travellers by typhoons pales into insignificance compared with their impacts on people and other living beings in Japan. The recent experiences have made me better appreciate what this entails. Life does go on, and overall Japan is well prepared to deal with typhoons. The extraordinary season of 2018 has however been a testing one. This is especially the case in the context of other extreme events that occurred over the 2018 summer in Japan – an extended heatwave, earthquake and torrential rains. The elements have been working overtime.

Addendum: In October 2019 I experienced first-hand the uncertainty associated with the approach and landfall of Typhoon Hagibis, the largest storm to hit the Kanto area around Tokyo for over 60 years. My personal account can be found here.

6 thoughts on “Typhoons on my mind, the extraordinary 2018 season in Japan”