When things come in threes you sit up and pay attention. So when the famous Japanese Ukiyo-e artist Katsushika Hokusai (1760–1849) unexpectedly popped up three times in the last two days, my interest was reawakened. Something was telling me that it was time to write about this remarkable man, an artist I have admired for many years. My delight in his art, which captures nature and the elements so vividly, has led me to visit the Hokusai Museums in Tokyo and Obose, Japan and travel to a major exhibition of his work in Melbourne, Australia. Yet it was only when searching online for an unrelated item that I discovered another fundamental connection between Hokusai and the elements – one that was quite an eye-opener.

‘Under the Wave off Kanagawa‘ (Kanagawa-oki Nami Ura) by Hokusai, more commonly called ‘The Great Wave‘, has become a global icon. It is the most recognised example of Japanese art in the world and recreated in numerous forms and places. At least two books and many articles have been written about the woodblock print. The wave even has its own emoji. Source: japanobjects.com.

‘The Great Wave‘ was published in 1830 as part of a series of Thirty-Six Views of Mount Fuji. In this striking image Mt Fuji represents a point of stability amidst the immense waves. The fishermen try and work with the enormous swell. The energy is intense. Hokusai rarely put majestic Mount Fuji front and centre in this series. One of the exceptions is a print that holds great significance for me. Compared to ‘The Great Wave‘ it has a ‘quiet’ energy yet is also an imposing image. The power and sacredness of volcanic Mt Fuji dominates in ‘South Wind, Clear Dawn‘, shown next. 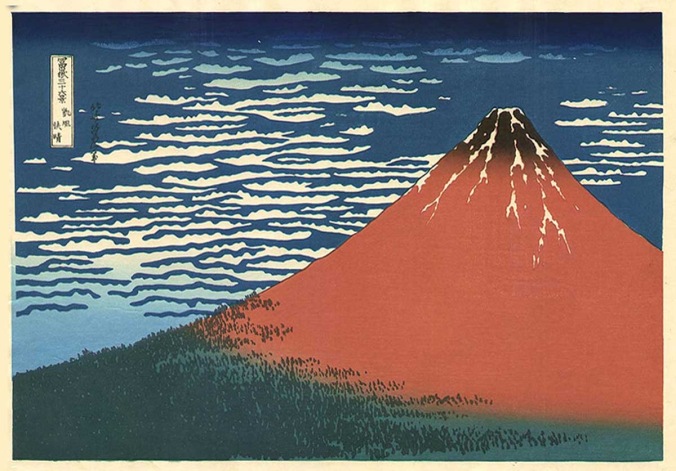 ‘South Wind, Clear Dawn‘ (Gaifu kaisei) by Hokusai, part of the series ‘Thirty-Six Views of Mount Fuji‘.  This is how the mountain appeared when I climbed it in 2019 as part of a Shugendo pilgrimage. It is a place of great awe and beauty that deservedly featured in two of the print series that Hokusai produced. Source: japanobjects.com

One of the three recent Hokusai ‘sightings’ that led me to write this post was on Facebook. It is also one of the ‘Thirty-Six Views of Mount Fuji‘, illustrating the diversity in these images. My friend Quentin Durning shared a link to a New York Times article about the Hokusai print ‘Ejiri in Suraga Province‘, the 10th image in the series. The image, illustrated below, shows a capricious wind playing havoc with travellers walking between Kyoto and Edo with Mt Fuji outlined majestically in the background. The print is one of my favourites. Titled ‘A Picture of Change for a World in Constant Motion‘ the NY Times article describes the print in detail and connects the image to the modern plethora of digital images that “blow every which way”. The author also highlights Hokusai’s influence on the international art world, something that started in 1867 and continues today.

‘Ejiri in Suruga Province‘, woodblock print by Katsushika Hokusai representing a sudden gust of wind. Source: wikipedia commons. (Because of the way they are produced, the colours of woodblock prints can vary considerably. This version seems particularly intense compared to others of the same print. )

These examples illustrate the masterful representation of nature and the elements that permeate Hokusai’s woodblock prints. They brilliantly capture the land and seascapes of Japan and the energy of earth, water, fire and wind in these settings.  Many of these images include people going about their everyday life, providing a glimpse of the relationship between people and nature in Edo Japan.  In addition to the storm waves and wind illustrated above, Hokusai recorded the impact of earthquakes, volcanic eruptions, intense rain and other elemental forces. He depicted the gamut of the elements, from tranquil to terrifying. 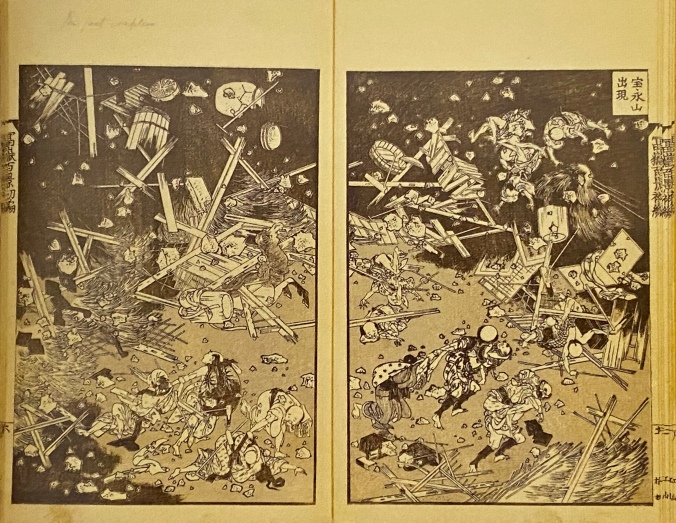 In this woodblock print ‘The Hoei Era Eruption‘ Hokusai imagined the force of Mt Fuji exploding in 1707, with homes, their contents and people in the vicinity being hurled into the air. This image is part of the series ‘One Hundred Views of Mount Fuji‘. Source: C.M.E. Guth, ‘Hokusai’s Great Wave: Biography of a Global Icon‘.  (2015).

Hokusai’s output was prodigious. He was active for over 70 years and had the epitaph ‘old man crazy about drawing’ inscribed on his gravestone. In addition to the two series he created on Mt Fuji, Hokusai produced sets of prints on waterfalls, bridges, poems, oceans, flowers and more. The ‘Hokusai Manga‘, published over several decades, contains 4000 images including landscapes, flora and fauna, everyday life and the supernatural.  The volumes were designed as a reference for students to emulate and became a best seller.

The ‘Hokusai manga’ was the focus of my second and third ‘sightings’ of Hokusai, which came from very different sources. One was in an animated children’s series called ‘Art with Mati & Dada‘ – a show I would have been unlikely to watch if it wasn’t for COVID-19. In the short videos, seven-year-old Mati, who has a passion for art, is magically transported into the lives of great artists by her companion Dada. Together they go on enticing and unexpected adventures, seeing the artworks through the eyes of the great masters and solving mysteries they were pondering in their everyday lives. The video on Hokusai starts with Mati reading the ‘Hokusai manga‘. That was the second reference I had seen to the publication in one day. 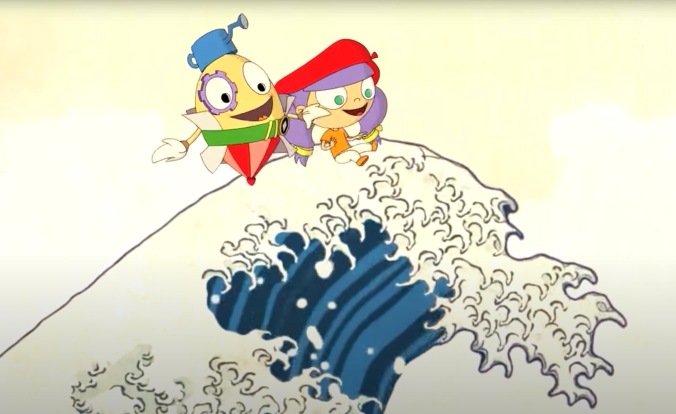 Mati and Dada are transported to Hokusai’s Japan riding the great wave he painted. The way the pair travel to different times and places  to visit different artists is cleverly depicted.

The link to the video on Hokusai is provided next. I found it entertaining, informative and accessible at different levels. For example, Mata, Dadi and Hokusai discuss the sacred energy in ‘The Great Wave‘, how you should ride the waves and go with the flow, and how while life changes, Fuji stands still. The founder of Zen Buddhism features, and an instructive demonstration of how woodblock prints are made is provided. It turned out that these videos have appeal for both children and adults.

Horyu-ji, a famous temple in Japan, is also visited by Mati and Dada in a separate video. Here the temple carpenter talks about how wood still lives after it is harvested and demonstrates how Japanese pagodas are earthquake proof. The five-tiered pagoda at Horyu-ji is of great interest as it also has an association with the elements. My blog ‘In search of gojunoto‘ goes into greater detail.  Apart from these two episodes, all of the other artists visited by Mati and Dada are European. This reflects Hokusai’s stature in the Western world.

My third recent sighting of Hokusai, the one that was an eye-opener, was discovered in a book titled ‘Translation in Modern Japan‘, published in 2011. My interest was sparked by a chapter titled ‘Hokusai’s geometry’, authored by Christine M.E. Guth (who also wrote the popular book ‘The Great Wave: a Biography of a Global Icon‘). In the geometry chapter Christine translates and discusses Hokusai’s ‘Quick Guide to Painting‘ (Ryakuga haya oshie), a work he “intended to teach aspiring artists how to paint by visualising the world in a simple formal vocabulary of squares, circles and triangles.”

One of the headings in the chapter is ‘The Book of Changes‘, also known as the I Ching or YiJing and as Ekikyo in Japan. This was not something I was expecting to see in a story about Hokusai. Perhaps I should not have been surprised given the widespread influence of the I Ching in the period Hokusai lived (see my blog ‘YinYang in Japan: harmonising vital energies‘ for more details). Christine refers to an extended commentary by Hokusai on an illustration of a torii – the gateway to a Shinto Shrine – as testament to the way The Book of Changes informed spatial thinking in Tokugawa Japan (~1603-1868). Published in the fifth volume of Random Sketches, Hokusai declared that if one kept the signs of divination of The Book of Changes in mind, and applied them while selecting the forms to be drawn, that it was a simple task to draw a torii. 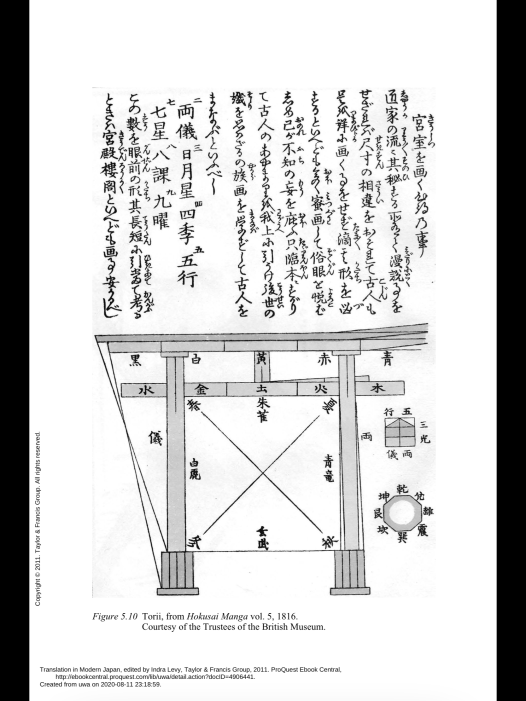 In this illustration by Hokusai, the two supporting pillars in the torii represent In (Yin) and Yo (Yang) and the five parts of the lower cross beam represent the five elements (Gogyo; from right to left – wood, fire, earth, metal and water). The four seasons and the eight compass directions are also represented in the torii. Source: Hokusai’s geometry. Ch 5 in ‘Translation in Modern Japan‘, Routledge Contemporary Japan Series (2011).

I was not expecting to see InYo and Gogyo feature in these proportions. This was fundamental new material about the elements in Japan and made me ponder how much is there still to learn? My appreciation of Hokusai’s art has been deepened, moving from a love of his exquisite rendering of nature and the elements, to understanding some of the deeper elemental philosophy underpinning it.

Several books have been written in English about Hokusai. None I have seen cover this topic or level of detail. They tend to focus on the use of western painting techniques in Hokusai’s woodblock prints and his long, colourful and unconventional career. In researching this post I discovered one of the earlier books written about Hokusai by the English artist Sir Charles J. Holmes. Written in 1898 the book refers to Hokusai as a painter of life and landscape. It is thoughtfully written, reflects on Hokusai’s representation of nature and people, and provides a useful historical perspective. One observation that caught my attention was how Hokusai could represent winter, and teeming rain, like no other artist. Thanks to the Internet Archive, ‘Hokusai‘ by Charles J. Homes is available to download free for those interested in learning more.

Additional insights have been provided by Professor Masashi Nakamura who I asked for input on Hokusai’s representation of the torii (after the post was written). This was his response:

” Structure” is the basis of Hokusai’s paintings and thoughts. The structural analysis of the Torii by Hokusai is based on the influence of Confucian education by the Shogunate in the Edo period. Originally, there is no such theory in Torii, but it is thought that Hokusai’s original structural painting thinking analyzed Torii in that way.  ….. The proof is the See-through Perspective ” 透視遠近法 Toshi- Enkin-Ho “,  which is Hokusai’s technique.

This suggests the connection between the torii and the I Ching/Ekikyo was Hokusai’s original idea rather than widespread in Shinto. (I have since discovered that Yuiitsu (Yoshida) Shinto extensively used the five phases (gogyo) when building their shrines, so there may be a relationship there). I would like to explore Hokusai’s interest in Ekikyo and sacred geometry further, including the square, circle and triangle. They add another dimension to his art and philosophy and a sense of the milieu he lived in.

To commemorate 150 years since Hokusai’s death a travelling exhibition was held in Japan to acknowledge his role as a bridge between East and West, a much vaunted dimension of his art. To my delight I found a copy of the 1998 exhibition catalogue in a second hand shop in Japan. The connection between Hokusai and Obose is featured in the book – I would recommend visiting this small village near Nagano to see the Hokusai Museum and his painting of a phoenix on a temple ceiling there. It is sublime. As I have discovered, there is more to Hokusai than meets the eye.

Many artists are inspired by nature and the elements. It is a topic that I have written previously about in my ‘sister’ blog FireupWaterdown. These posts include ‘Visualising the elements‘ about Turner and artists that I personally know, and one specifically on artists in Tasmania. It is a pleasure to add Katsushika Hokusai to the collection. There are numerous other elemental Japanese artists who could also be included – a post for another time.

4 thoughts on “Hokusai, a master of the elements”