Ninja are immediately recognisable in the west, their imagery and behaviour in most cases only loosely based on the original Japanese qualities. Movies, TV series, comics, video games and a whole world of merchandise demonstrates the continued interest in these  mysterious action heroes. Not surprisingly my interest in the ninja is their connection to the elements. That gave me a reason to see the 2017 Lego movie ‘Ninjago‘, ostensibly a movie for children, where the elements are featured. My interest has also lead to reading translations of the original ninja manuals and sourcing other information from Japan. Comparing the different representations of the ninja (west and east, modern and traditional), the ninjutsu they practice, and their relation to the elements has been intriguing – and complicated. These are my impressions so far.

END_OF_DOCUMENT_TOKEN_TO_BE_REPLACED

Feng shui has become a phenomenon in the west over the last few decades, as discussed here. To cover the wide range of subjects and styles associated with the approach, there are now over 50 feng shui books sitting in my bookshelf. All are based on the ancient Chinese art of placement used to create harmony in our environment through the manipulation of energy. In Japan feng shui is called fusui (wind-water). Fusui has had a long history and wielded considerable influence from ancient to contemporary times. Like other practices that incorporate the five Chinese elements in Japan, such as traditional Japanese medicine, the art of fusui has had limited exposure outside of the country. Based on the information I’ve been able to find in English, a summary follows of what I have learnt so far. It represents the first steps in an ongoing journey of discovery.

END_OF_DOCUMENT_TOKEN_TO_BE_REPLACED

Lafcadio Hearn changed the way the west viewed Japan when he lived there between 1890 and 1904. Over that period he wrote several books and articles in English, most famously his 1894 publication ‘Glimpses of Unfamiliar Japan‘ which is still in print. Less well known is an editorial he also published in 1894 (for the Kobe Chronicle) titled ‘Earthquakes and national character‘. Hearn, like me, had an interest in the relationship between people and nature. And like me, he pondered the connection between the frequent natural ‘disasters’ in Japan and the character and culture of people who live in such a changing and unpredictable environment. Earthquakes, tsunamis, volcanoes, floods, fires, snowstorms and typhoons are all expressions of the elements at their most forceful and energetic. For me they ‘set the scene’ for my exploration of elemental Japan.

END_OF_DOCUMENT_TOKEN_TO_BE_REPLACED

My post ‘Taiko and tea’ shares my first impressions about the relationship between tea and the elements in Japan. My concluding comments were ‘Five elements and six senses. A heady mix.’ Since then I have had many more opportunities related to tea, thanks mostly to Allan Halyk, a Urasenke Tea Master based in Hobart. In October 2016 I spent 10 days in Japan with Allan, two of his students and a friend. We walked many miles in Osaka, Kyoto and Uji to immerse ourselves in tea. It helps to be with those who are familiar with the way.

END_OF_DOCUMENT_TOKEN_TO_BE_REPLACED

The Teshima Art Museum provides an organic setting where water, wind, wood and light are works of art. I learnt about this enticing concept from a French couple I met in Japan in mid 2016. Sibylle and Bernard called it the Raindrop Museum – an evocative description. They were close to the mark. The brief given to the architect Ryue Nishizawa and artist Rei Naito was to create a design of free curves, echoing the shape of a drop of water. Knowing my interest in the elements, my French friends strongly recommended that I make the Museum a priority to visit. So in early October that’s what I did. The Museum has other attractions – its location on an island in the Seto Inland Sea provides an experience of some of the coastline, waterways and islands of Japan, an important part of the elemental story. The Art Museum is also a major draw-card of the Setouchi Trienniale, an art festival designed to reinvigorate local communities that has many lessons to teach us.

END_OF_DOCUMENT_TOKEN_TO_BE_REPLACED

October 1st 2016 marked the first day of my return trip to Japan to continue my exploration of the elements. In contrast to my last visit when I was based in Kyoto (see my first 8 posts) this time I am on the move! I have identified a number of places and traditions with specific connections to the elements to visit and interact with over the next two months. And then there are those delightful serendipitous opportunities that seem to arise quite often.

END_OF_DOCUMENT_TOKEN_TO_BE_REPLACED

‘A destiny drawn by nature‘ is the first chapter of a book titled ‘The Dawns of Tradition‘, published by the Nissan Motor Company in 1983. I knew that this publication was an important discovery when I read the introductory words “Even more than most peoples, the Japanese have been shaped by their environment. From the dawn of their history, close communication and an oftentimes precarious coexistence with nature have dominated almost all aspects of the national character and culture.” Viewing Japanese culture through the lens of the environment (in my case using the elements as a framework) is also the focus of my book and blog on elemental Japan. While the approaches taken differ in many ways, the basic sentiment is the same.

END_OF_DOCUMENT_TOKEN_TO_BE_REPLACED

Japan is a land of forests. Sixty seven percent of the country is covered with trees, only second behind Finland when ‘developed’ nations are compared. Currently the forests are vibrant and green, you can’t help but notice them on the mountains and in the Shrine and Temple forests as you travel around. Both mountains and trees are worshipped in Japan to varying degrees. Given the abundance of forests it is not surprising that wood and related materials play such an important cultural role. This is the element that has particularly caught my attention during late June and early July 2016. Here are my impressions, once again a diverse mix. The many connections between wood and fire demonstrates the inter-relatedness of the elements. As always with these informal posts, it is only part of the story.

END_OF_DOCUMENT_TOKEN_TO_BE_REPLACED

It’s the fourth week of June 2016 and it is the rainy season in Japan. The season is known as Tsuyu, meaning “plum rain”, because it coincides with the season of plums ripening. It is hot, sticky and very wet at times. It also means long days, vibrant vegetation, misty mountains, rice fields in flood, hydrangeas, the refreshing of water supplies and more. As you might expect, my thoughts over this period have turned to the element of water. I am using illustrations to help tell this part of the story of elemental Japan.

END_OF_DOCUMENT_TOKEN_TO_BE_REPLACED

The tea ceremony and taiko are both quintessentially Japanese. You could say they represent two ends of a spectrum of formality, from a refined, elegant ritual to rousing, energetic (and very loud) performances. Over the last few days I have experienced taiko as a player and audience member and visited Daitoku-ji Temple, a centre for the tea ceremony. As well as their connection to the elements, what has struck me about tea and taiko is the range of senses they engage. It is a timely reminder that elemental Japan captivates all of our senses. 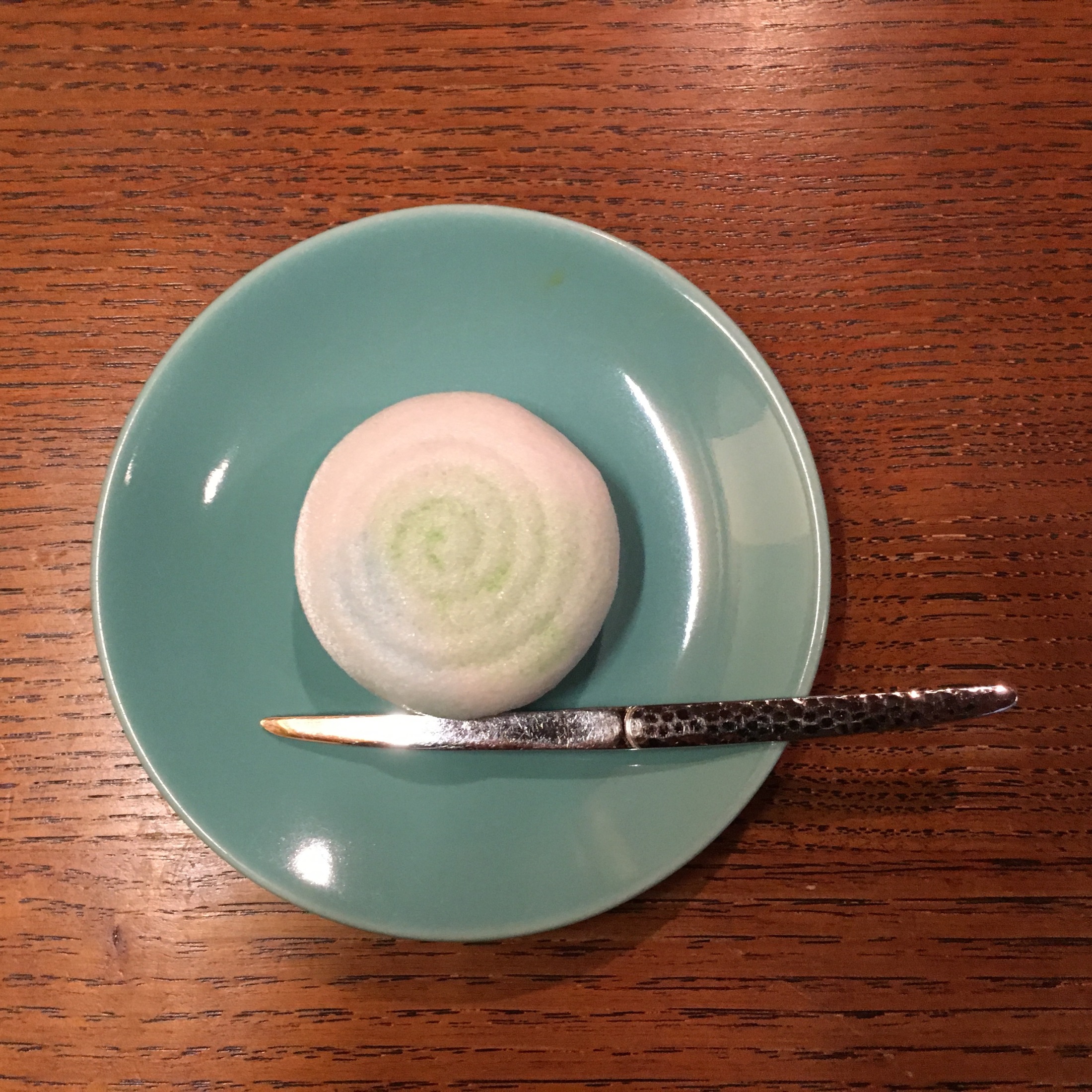 A Japanese sweet served before matcha (powdered green tea). The pattern and colours represent a water ripple. Just in this image you can see earth, metal, water and wood.  The elements are everywhere in Japan.